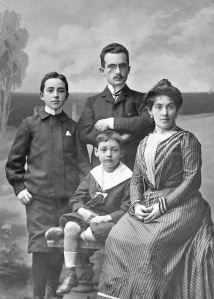 Many of us are parents. A few of us are grandparents. People with fine genetic make up are called great grandparents. The next level of family hierarchy is curiously just a slight repetition of the previous title, as great great grandparents will always receive a red underline warning with today’s software, to suggest that you are repeating a word. Well perhaps we could come up with a better adjective, replacing “great great” with “superb” to alleviate any confusion for the description of you 98 year-old relative.

Family trees and ancestrial research is a booming business, as many try to justify their gypsy tendencies of stealing wallets or wearing headscarves in public when they haven’t had time to wash their hair. The curiousity of who we are and where we came from is irresistible. A Swede without blonde hair or a redheaded child in the middle east, can cause uncomfortable questions about fidelity and that night in the bar when you did not come home.

Generations were prisoners of their time. Just because your relatives who worked the farm in the 1800s didn’t text their siblings to share how well the crops were going, didn’t mean they didn’t care about their family. Tradition trumped progession as patriarchs and matriarchs copied the dispersal of work and play within the family, from what they had observed from their previous generation.

This pattern of proper gender specific roles, did not have the benefit of books on parenting, books on self-esteem or Dr. Spock’s best selling chapter by chapter guidance on child development. No parents parented on instinct and situational decisions. There are very few black and white photographs to support this theory, however well repeated stories that begin “When I was a kid” have been told to help the newer parents appreciate how easy things are today.

Civilization has created quite a change in the roles and responsibilities of parents. Two parents working providing income for family survival, are now dependent on daycare to help with the needs of their children. Phrases like ‘quality time” have replaced “all the time” as measures of family interactions.

With a little self-reflection, which is rare for me as my mirrors need a good cleaning, I will boldly go where no parent has gone before. There is one rule when observing other parents raising their children. You say nothing. You can criticize a chosen tint in the new hair style of a mother, you can make an unkind comment about fashion choices a father chooses for weekend wear, and you can even critique the unevenness of the lines made when mowing the lawn. But you can never, I repeat never, offer suggestions on how fellow parents are raising their children. Well you can, but that will be your final conversation with that mother and father.

Since this topic of conversation is taboo, it seems a more general untargeted suggestion might be helpful as new parents struggle to raise new children in a new world. My recommendation is quite simple: Be a better version of your parents.

Now the literal understanding of this for those who live in a black and white world will not translate well. I am not suggesting if your father was tall, be taller. I am not saying if your mother was pretty, be prettier. In a world of colour, black and white thinking tends to get in the way of future possibilities.

I start this recommendation with a controversial premise: You are a flawed human being. Your parents are flawed human beings. As wonderful as your grandparents are, they too are imperfect creatures in an imperfect world. As you hold your new little baby in the maternity ward of your local hospital, a million thoughts will bombard your brain. The most honest thought is usually “Now What am I supposed to do?”

Be a better version of you parents. This is a very incremental suggestion.

If you father was a prick, be less of a prick. If your mother was domineering, be less domineering. If your father was an alcoholic, be less of an alcoholic. If your mother was perfect, be a little more imperfect. If your father was an absent parent, be there a little more often. If you parents replaced boundaries with spoiling, unspoil your children. Replace poor communication as a family dynamic, with just a little better communication standard. When discipline was avoided to spare the feelings of the poorly behaved, unavoid this pattern just a little. If your family used criticism as the only method to converse, add the occasional compliment to help a child. If mother had issues with her parents, have less issues with your parents, and learn to forgive.

I could go on with every single issue your parents and their parents had that often cripple your own abilities to move on, but move on. Your parents did the best job they could. Just be a better version of them.

Your spouse will tell you that you are just like your dad, or just like your mom. Accept this, because you really had no choice, but begin the individual game of slight improvement. One slight enhancement of a flawed generational behaviour can change your family’s destiny.

The previous sentence may seem a little “over the top”, but I believe this to be true. There are more than enough inspirational poster proclaiming we can improve the world on step at a time, but rarely do the offer what those steps might be. Be a better version of your parents.

Few rocket scientists, brain surgeons or even used car salespeople will argue that the most difficult job on this planet is raising decent, respectful children. Because the conversation of poor parenting only occurs when the parents aren’t there, this makes it an impossible problem to solve. Be a better version of your parents.

If this very simple recommendation is considered by a few, I will once again go boldly where not parent has gone before, with a bold prediction. Five generations from now, lets say in the year 2118, there will be a grandfather sitting at their family’s kitchen table, who does not slurp loudly, when he drinks his coffee.

This is only a draft of my blog, I promise a better version when I find time to edit. Lineups for ten city blocks form every time Apple releases a new IPhone. This is encouraging as it does suggest we are all waiting for a better version.

Cue the Blong: More reflection of the past…

2 thoughts on “A Better Version”