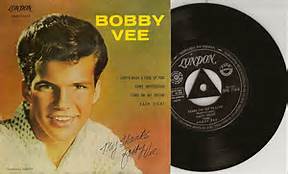 The Death of Bobby Vee

Your computer will occasionally deliver bad news with bulletin reports of the deaths of celebrities. When people like Prince and David Bowie pass away, most of the world mourn the death of these artists as they feel connected because of their personal contributions to the world.

Every so often I read about someone who has died and I don’t have a strong recollection of this famous person. This happened to me on October 24, 2016 when news sources announced that Bobby Vee had died.

As I read his obituary it was clear we had never met, kind of like the neighbours three doors down the street, yet it seemed I knew and liked one of his songs from 1962. “The Night Has a Thousand Eyes”, was a song I somehow have a strong remembrance of even though I was just 3 years old when it was released. My mother also liked this song as she always turned up the volume when it came on our radio in the kitchen. While smiling and listening to this song she had a remarkable ability to let every one of her six children feel that they were important to her, but took a three minute parenting break every so often to listen to a favourite song.

Because I had a little time with very little to do on October 24th, I did what we all do when we need information, and realize our library cards are seventeen years past their expiry date. Well this internet thing is full of quite a bit of information, and I began my Bobby Vee research. It turns out he had been suffering from Alzheimer’s disease, just like my mother and had died in a Hospice in Rogers Minnesota. He was born in Fargo (a great movie) North Dakota.

His introduction to the music world was pure circumstance. On February 4th 1959, Buddy Holly, The Big Bopper, Ritchie Valens and others were to perform In Moorhead Minnesota for the Winter Dance Party. On February 3rd 1959, the day the music died, those musicians were tragically killed on the plane headed for that concert. Fifteen year old Bobby Vee (born Robert Velline) put local Fargo musicians together including his brother to take the place of the performers who clearly won’t going to make it.

I was a little confused why North Dakota schoolboys played in Minnesota. I am so often told not to believe anything you read on the internet. My researched continued as I Googled this conflicting information in Google map form, to explore this confusing geographical data. It turns out Fargo North Dakota is precisely 1.07 miles (1.72 kms.) from Moorhead Minnesota. It seems this is more than likely a true event.

That emergency performance was the beginning of a very successful music career for Bobby Vee.  Thirty-eight top 100 songs and eight gold records. “Take Good Care of My Baby”, “Rubber Ball” and “The Night Has a Thousand Eyes” are just three of his many early hits. The band started touring and let a musician calling himself Elston Gunn play on the tour. Bobby Vee noted this guitarist could play very well in the key of C. Turns out this guitarist went by the name Bob Dylan when he learned to play in other keys.

Eleven days before Bobby Vee passed away Bobby D won the Nobel prize for literature. What is more remarkable is an introduction Mr. Dylan made on a Minnesota stage just a few years ago.

“Thank you everyone, thank you friends. I lived here a while back, and since that time, I’ve played all over the world, with all kinds of people. And everybody from Mick Jagger to Madonna. And everybody in there in between. I’ve been on the stage with most of those people. But the most beautiful person I’ve ever been on the stage with, was a man who is here tonight, who used to sing a song called “Suzie Baby”. I want to say that Bobby Vee is actually here tonight. Maybe you can show your appreciation with just a round of applause. So, we’re gonna try to do this song, like I’ve done it with him before once or twice.”

Bobby Vee continued to play Winter Dance Party every year as a tribute to Buddy Holly and his tireless commitment to the Minnesota \ North Dakota music scene. He was married to the same lady Karen, for 52 years until she died from kidney failure in 2015. They had three sons and  a daughter. His sons played with him until the end. Not a lot of scandal with Mr. Velline, and believe me I looked.  In 2011 Bobby Vee was diagnosed with Alzheimer’s disease and stopped performing, though there are some touching videos on YouTube showing him perform with his sons at the end.

I went down to my basement as I do every week to record something, but this week I sadly chose the song my mother seemed to enjoy so much, while she parented her young children. When I visited her this week, I forced her to listen as unlike those not suffering from Alzheimer’s disease, she really can’t politely walk away. As I played the song I swear for a nanosecond she smiled. Was there still a little part inside her deteriorating brain that had hard locked this Bobby Vee song? Was that Bobby Vee neuron so powerful, that it refused to succumb to her disease? Do fellow Alzheimer’s patients communicate with each other even after one has passed? Am I crazy? Can we just politely answer “maybe” to these hopeful questions?

Lately at night my mother has taken some rather brutal falls so we have asked for much more supervision at the home. Five nurses, six children and dad only means 24 eyes are around to watch. We need more Bobby Vee, so if angels exist, and you could round up 488 angels to help with those lonely nights, we will have a thousand eyes watching over her. Bobby you can watch too, because based on my research, you seem like a pretty caring guy.

And another small request for you Mister Vee. Since I have done such a nice tribute to you (I rarely do things without asking for something in return) could you do one more thing for me?  My mom has regressed so badly she is now reversed into that three-year old baby, that I was so many years ago, when we first heard your very catchy song on that static radio in 1962. I am not enjoying this role reversal, as I am not as nice a guy as you seemed to be.  Put a little dedicated group together wherever you are, to help my helpless family out… and Take Good Care of my Baby.

4 thoughts on “The Death of Bobby Vee”